HomeInternet
By Avinash on March 25, 2011 Internet

Many Avtechies already use WOT (Web of trust) Addon or extension with their browsers ( Firefox, Chrome etc.). We have already talked about WOT sometime back on Avinashtech. Even though We know that it is not 100% accurate and can be manipulated but in majority of cases, WOT Ratings give a clear picture about the URL, the website and its activities making it too simple for even a novice user to distiguish between a good link and bad link.

Now, developers are working on WOT SocialÂ  which aim to protect you from bad links on facebook, twitter etc. It will help you distinguish from the very first glimpse, if the links your social friends over twitter and Facebook are sending you can be trusted or not.

The logic which makes Facebook and Twitter vulnerable to these bad links is best summarized by WOT developers on their blog.

Social networking – on Facebook, Twitter and elsewhere – is a big part of what people are doing daily on the internet. Social media allows messages to spread far and fast and become popular, even viral. When the messages come from someone that you know and trust, itâ€™s often perceived as safe. Put these factors together, and you’ve got a very tempting target for scammers and hackers. Typically, a scammer takes over an account and uses it to spread links which are contaminated, lead to phishing or malicious sites, or intend to capture more accounts. 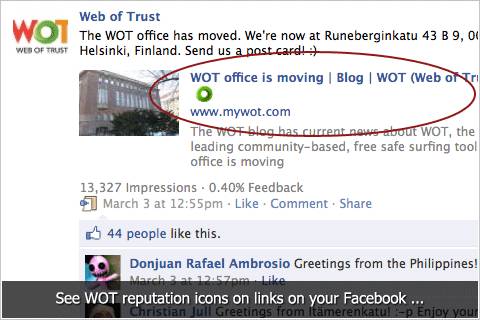 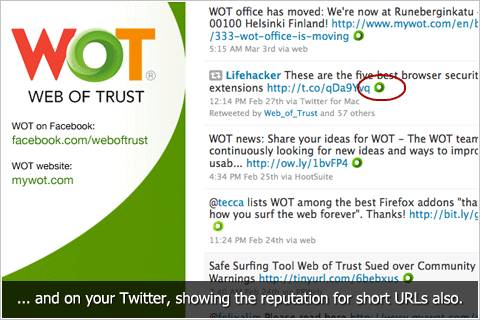 Via: Web of Trust Blog