Nokia has been consistently comng up with new Lumia devices to address diverse consumer base with diverse budgets. Lumia 625 is another such attempt to address consumer base having a moderate budget who want access to big screen with access to music and movies on the fly. The review below is based on our experience with Lumia 625 review unit over extensive use of the device for almost 15-20 days just like my primary phone. 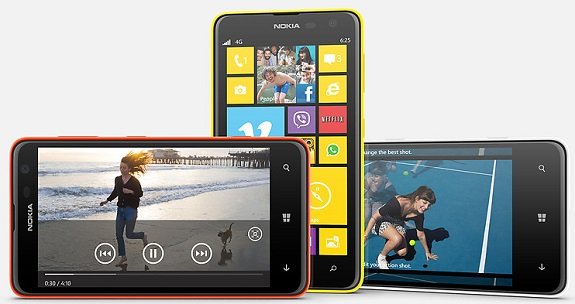 Lumia 625 is powered by  Dual-core 1.2GHz Qualcomm Snapdragon S4 processor with Windows Phone 8 as the operating System along with 512 MB RAM. The Amount of RAM though may restrict the device from running some of the games and even apps on the device as more than 512 MB Ram required for playing some of the high-end games on Mobile Platforms like Windows Phone or Android. Apart from this, absence of a dedicated GPU engine in the device poses some restrictions too.

The device comes with an inbuilt 8 GB memory along with the micro SD Card support up to 64 GB. The device ran smooth during our review period and we didn’t notice any lag during the period we tested the device (for almost 10 days of full use). The issues that we encountered during our review were all related to Windows phone operating system as the apps did few seconds to resume when we came back to some app after sometime.

You can find a dedicated button for the Camera which can be used to access the camera directly without unlocking the device. This feature though is present in all Lumia devices.

As I keep saying that in terms of the design quality and colours, I always find Lumia devices bring new & fresh look on smartphones compared to almost similar devices on Android platform whether its Samsung or any other manufacturer barring few exceptions.

The Back covers can even be changed letting you change the color as per your mood and giving you a new phone just by changing the removable back cover.

Even though we can open the back cover of the device, you cant remove the battery out of the device. The battery is fixed inside the device and is visible, but its not removable.

You can find buttons for Volume rocker, Camera and Power on the side portion of the device along with the standard micro USB slot for charging and data transfer. The speakers are located at the back side of the device. 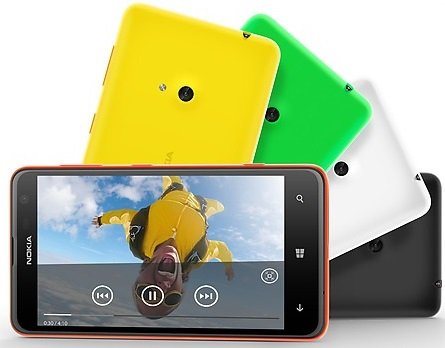 It comes with 5 mega pixel rear camera with LED flash, 4x digital zoom and auto focus capability. Additionally, a front camera of 0.3 MP for video calling is there on the device. Keeping the fact in mind that Camera quality is always the focus of Lumia devices, we were disappointed with quality of the images taken using the  main camera. he images didn’t turn out to be as good as we expected.

The device comes GPRS, EDGE, 3G and Wi-Fi along with the option of sharing your 2G, 3G using WiFi hotspot.  While using the WiFi on the review unit though we faced some issues as it often asked us to enter the WiFi password again after we accessed the device after few hours.

It comes with micro USB port for charging and transferring data along with Bluetooth 4.0.

The device includes FM radio which lets you listen to FM radio stations on the move.

The device is powered by 2000 mAh battery which can be considered as a major bump over batteries of Lumia 520 (1300 mAh) and Lumia 620 (1430 mAh). But even if you consider the fact that you are having a much bigger screen in this device, the battery capacity looks good. During our review period of 15-20 days, Lumia 625 lasted for almost full day even with heavy use of 3G, twitter, Facebook, two push email accounts and Whatsapp.

One small issue thoughwhich we encountered, was related to standby time. The device battery went to zero when we left it for one day even though the device was almost 80% charged when we let it on our table and not touched for almost 14 -15 hours. Hopefully, the issue was with our review unit specific as Nokia claims to have maximum standby time of 23 days for the device.

The device battery performed exceptionally well when we used the device as a WiFi hotspot for hours and  I can say for sure, none of the Android smartphones I ever tasted lasted so long if used as WiFi hotspot.

The device doesn’t  support Wireless charging which means you can not charge the device without using a wire.

This section applies to almost every review that we do of Windows Phone devices, most of which are Lumia devices. Windows store still needs to cover a lot of ground to get at par with Android and iOS apps.

The device comes preloaded with Microsoft office suite for Mobile device in addition to the usual Nokia exclusive apps like Nokia Here, Nokia smart cam and many more.

Windows Phone software as whole OS still lags behind in terms of user experience. They have improved a lot during last year or so, but still I don’t get the same comfort of using a Windowsphone device as i get using a Android or iOS device. Keep in mind, I am only talking about the software part here. May be I can write another post on what I don’t like in Windowsphone 8 OS and what can be improved.

The best reason to grab Nokia Lumia 625 for many users in India will be the Nokia Music unlimited subscription and Movies. If you are a music freak or you love to watch and download movies from the internet, Nokia Lumia 625 gives you access to almost unlimited content for free.

Nokia music unlimited subscription lets you listen to music online and even download it on your device without any restrictions. You can even transfer or play the downloaded music on any other device or on your system. The Nokia music library or the content is quite big and you can find almost any music you ever wanted to listen.

Similarly, you can watch movies online on the device using the “Your Movies” app and can even download the movies on your device. The library of movies is quite big and includes latest & old movies from Hollywood, Bollywood and regional languages too.

We were able to watch Movies online without any hiccups or buffering problems. The movies played as if they were stored on the device itself instead of being streamed live.

As far as I know, the unlimited subscription is valid for 6 months. Correct me if I am wrong ( i was unable to find a specific time period on the Nokia Lumia 625 page).

If you love big screen smartphones, love listening to music and love watching movies on your smartphone, then Lumia 625 is the device for you. Also, if you are not so much worried about the screen resolution and want a windows phone device under a moderate budget, it is for you.

But if you love to play too many games on the smartphone including those which need more RAM, then this is not for you.

The device is priced around ~15k at the moment even tough the launch price was 20K. You can buy it from online retailers like Amazon, Flipkart tc or any offline store of your choice.