HomeGoogle
By Avinash on October 8, 2011 Google

The next version of Android called as Ice Cream Sandwich 4.0 is about to officially released soon along with the announcement of Samsung’s Nexus Prime. Even though the release ofÂ Samsung’s Nexus Prime has been postponed, numerous leaks over the WebÂ  from various sources are giving good information about how it will be. These leaks include images, videos and apps too.

Check out some of the images leaked by Mobilissimo tells clearly that that Samsung’s Nexus Prime with a codename of “tuna” has Android Ice Cream Sandwich version 4.0 as the operating system. Apart from this basic information,Â  soft buttons for home, back and menu buttons, widget placement and some redesigned icons for Google’s applications are also seen. 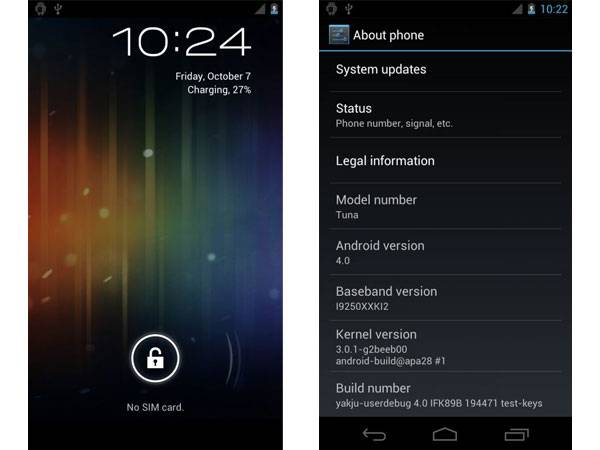 Videos showing hands on with Samsung’s Nexus Prime along with boot animation too are also leaked and you can have a look to check out how it will turn out to be.Â  Check out two of the videos below hosted on youtube.

Apart from these leaks of videos and screenshots, AndroidPolice got their hands on Google+ 2.0 and Music 4.0 apps that support the Ice Cream Sandwich experience. They even got the .apk files too that are requiredfor installing Google+ 2.0 and Google Music 4.0 on a Android device. If you want to test these leaked Google+ and Google Music apps on your Android Device, then you can download the required .apk files from the links provided. They have uploaded the .apk files on various file hosting sites. These new apps show some improvements on existing version but it may be missed by average users.

These leaks of screens, Videos and apps show that Â Ice Cream Sandwich 4.0 is polished well but unless we really get our own hands on it and how it performs, we cant have a real view on How good or bad it will in terms of various other parameters like performance on devices, smoothness and bugs etc.