HomeInternet
By Avinash on August 12, 2011 Internet

After the launch of Google+ we were not expecting another launch of a new Social network in this short span of time. Twitpic which has been made almost obsolete after the release of image sharing capability within twitter itself, launch Heello which appears to be a total rip off of twitter in almost every aspect.

I am not sure why someone want to release a clone of twitter which does almost the same thing as twitter does? Even though the work on Heello started almost a year ago, still do we need a twitter clone in the form of another network? Why the people will use it or switch if it offers almost the same features as offered by twitter? 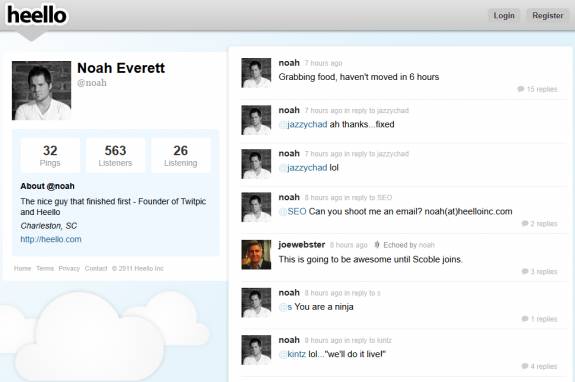 Heello limits the message length of 140 characters which is same as twitter. In terms of similarities, it uses the same “Replies” term for the replies with @ sign and offers Image sharing right inside the Heello. The message box too is almost same as that of twitter. You can even change the background of your Heello Profile using your own background image just as twitter. Some of small differences just in terms of terminology are as follows (wrt Twitter)

Heello plan to introduce Text message notifications, Video Sharing, Location check-ins and Heello Apps for iOS and Android as soon as possible. So stay tuned and watch if it can produce some turbulence in social network scene.

What do you think about it guys? I did create a account there just to get a feel. It looks nice, but I am not sure how far it will go in future.

Previous ArticleGoogle+ Games gets LIve and being rolled out to everyone slowly
Next Article Sync bookmarks, extensions, apps, theme, and browser preferences across multiple computers