Here comes another antivirus but with a different concept on which it works. Its released by Panda and its free above all. Its still in Beta for the time being but they claim it will be free forever after it comesÂ  out of beta too. So whats different in this compared to other ones including Panda’s own antivirus product. Lets see, i will try to tell about it.

This is the first free cloud-based antivirus thin-client. This works on a new protection model based on a thin-client agent & server architecture which services malware protection as opposed to locally installed products. By combining local detection technologies with cloud-scanning capabilities and applying non-intrusive interception techniques on the client architecture, Panda Cloud Antivirus provides some of the best protection with a lightweight antivirus thin-client agent that barely consumes any PC resources.

Panda claims it will be able to detect malware more fast and designed to act only when necessary. It’s so light and you wont feel its there on your system. 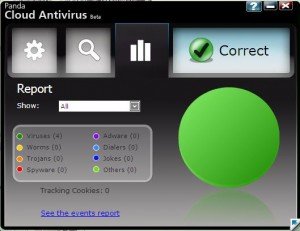 Panda Cloud Antivirus is intelligent and has been designed to act only when necessary. It’s so light, you won’t notice it’s there, even if you are playing or using the Internet…

The fastest in detecting new viruses

Our network of Collective Intelligence servers identifies and processes viruses automatically in a fraction of the time required by laboratory technicians.

Designed with you in mind

Now you can forget about tiresome antivirus products with incessant notifications and difficult questions.Panda Cloud Antivirus works for you without annoying you.

The real key toPanda Cloud Antivirus is in the Collective Intelligence servers. That’s why you’ll always have maximum detection capacity without relying on traditional updates.

Detects more than anyone else

The Panda servers have a database of millions of viruses allowingPanda Cloud Antivirus to detect the multitude of threats that appear every day.

The community is key

Benefit from a network of users who automatically share information about viruses detected on their computers, ensuring that solutions travel around the world in just a few seconds.

I installed it on my system and checked with 3 test virus files and Cloud antivirus detected it on the fly immediately. The detection was quick enough. It didn’t even let me download few virus test files. Thats a good performance.

As i had enabled the automatic management and that’sÂ  why it deleted few of the cookies from my browser cache which wasn’t necessary though. Anyway it seems a good one and its on my computer for the time being. Give it a try and you wont be disappointed.