Bitdefender Total Security 2013 is an all in one security solution for your PC comprising of Antivirus, Antispam, Privacy Protection including Facebook & twitter, Firewall, Parental Control, System tuneup, ID Theft Protector,Â Anti-theft guardian for laptops,Â Encryption for files & folders and much more. If you need a all in one solution for everything that your PC needs, thenÂ Bitdefender Total Security 2013 can be a great pick. We will be reviewing it today.

Web installer was able to detect a existing License of Bitdefender Internet Security on my system and asked me if I would like to use the existing License on the system and install the Internet Security instead of Total Security.Â During the install it scans your system for anyÂ existingÂ infection before the actual installation starts. If you use the offline installer, the install finished in few minutes.

The user interface is almost exactly same as the GUI of last year Bitdefender products with almost no change in it. As this product is targeted at users who need a all in one solution, the GUI does reflect the mindset of their targeted audience. If you are a advance user like me, the settings or configuration options for the product can be too simple and you may not like it. But if you are an average user or even novice user, you would love the way it is setup.

It comes with features like Parental control to protect & monitor your children from online threats, USB Immunizer to protect threats originating from flash drives etc. TheÂ Tune-Up module cleans up your file system and registry helping the system to improve performance without using any additional tool automatically. It also comes withÂ File Shredder which removes all traces of your deleted sensitive files from PC andÂ File Encryption to lock confidential files in an encrypted vault.

Some of the new features that come with this new version are Bitdefender Safepay and Device Anti-Theft.Â Safepay protects you fromÂ hackers by automatically opening all your online banking pages in a separate, secure sandboxed browser.It automatically detects the URLs of most of the banks etc and asks you to open them in safepay automatically.Â Device Anti-Theft can help you lock, wipe or even locate your laptop from any Internet-connected device if it gets lost.

One of the major problems with any All in one security suites are associated performance problems for the system that comes after installing them. As you can see from the screenshot below, Bitdefender Total Security is consuming a memory of ~10 MB only and a CPU of Â ~1% only during the normal running of the system. I am using it for almost 2 weeks now and I have not felt any performance issues on my Desktop or any crashes. 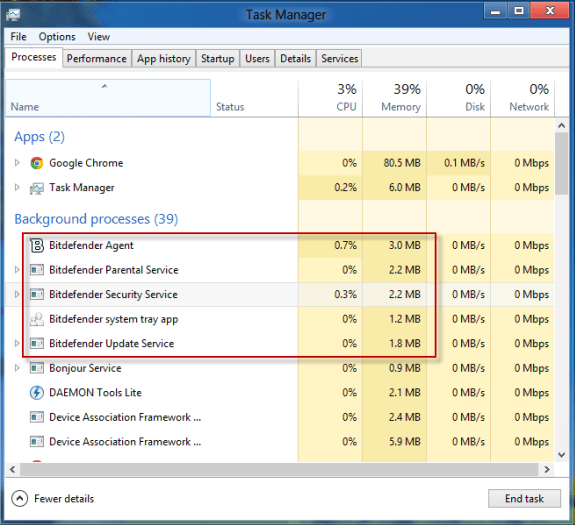 If you look at the Memory consumption during a custom scan by Bitdefender Total security, it consumes ~50 MB and ~&0% of CPU. The screenshot below is taken when the memory consumption & CPU use was at maximum and it normally gets stable after few minutes with much less memory and CPU consumption. 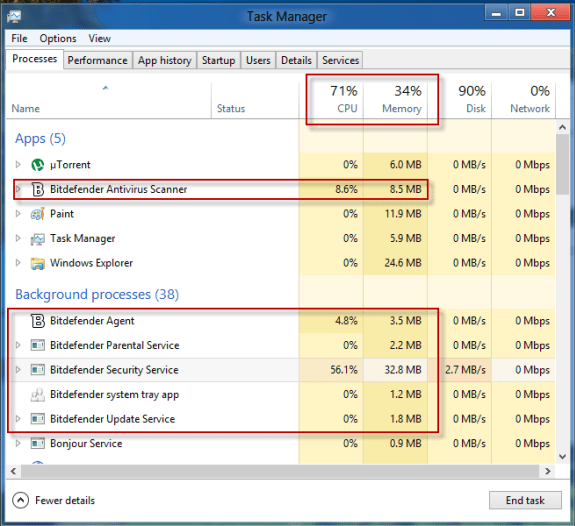 I am not going to talk about how good or bad the virus detection & removal rate and other security featuresÂ are, as with my any other Antivirus or security solution review, I avoid talking about . It comes with decent features without any performance issues on the system, though during testing it on a Windows XP machine with just 1 GB of RAM (minimum system requirement), it gave me some problems with the parental service getting crashed and I had to uninstall it from that system. The mere 2 GB online storage space too is not good enough as most of the cloud storage services provide much better features and space for Free.

If you are looking for a decent all in one security solution, you can give it a try. Use the download links below to install a 30 days trial.

We will be giving away 10 License keys of Bitdefender Total Security 2013 soon.