HomeMobiles
By Avinash on November 27, 2013 Mobiles

Lumia 520 is the most popular Lumia device from Nokia and is one of the best entry model device in Lumia range. Nokia has now unveiled Lumia 525 which can be considered as revamped Lumia 520 as everything in Lumia 525 looks same as Lumia 520 from outside except the differences in the hardware. 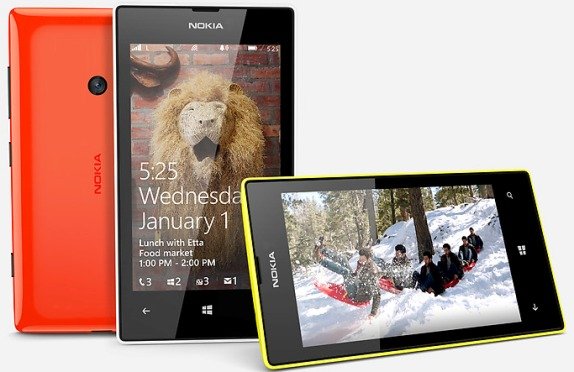 The major upgrade from the Lumia 520 is the amount of RAM in Lumia 525, which is now double. Lumia 525 comes with 1 GB of RAM whereas Lumia 520 came with just 512 MB RAM and was considered one of the major roadblocks for many users in making the buying decision. Often 512 MB of RAM was insufficient to play most of the high end graphics games or users were unable to run memory intensive apps.

The device comes with same 5-megapixel camera without flash and no front-facing secondary camera. In terms of storage, it comes with 8GB internal memory along with MicroSD expandable memory card support up to 64 GB.

The device comes with a 4-inch WVGA display and is powered by dual-core 1GHz processor. In terms of battery, it is powered by 1430 mAh BL-5J removable battery. It will ship in black, white, orange and yellow colors which can be swapped easily.

It will not be coming to US first but in most countries throughout Africa, Asia Pacific, and the Middle East starting mid December.

Lumia 525 will be available initially in Singapore for SGD249 ( ~ $199). We will have to wait for pricing in other countries but it will be in the same range.