HomeMicrosoft
By Avinash on July 15, 2011 Microsoft

Looks like everyone is working on something to get some pie of social web. After Google released Google+ which is gaining lot of popularity among the web users, next turn is of Microsoft perhaps. Microsoft accidentally revealed itsÂ new project called Tulalip which looks like something similar to Google+ or may be hybrid of services like Facebook or twitter. We do not know any other details except the home page which got revealed accidentally. 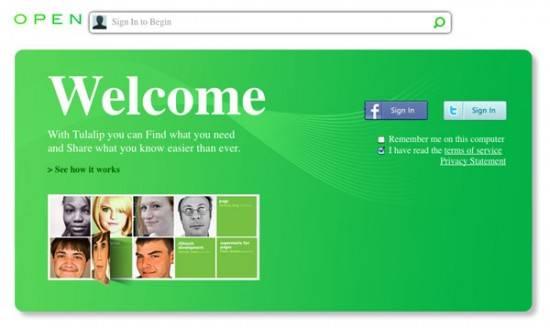 Tulalip got revealed on Socl.com which is owned by Microsoft. On the home page, you can see the welcome message along with a Facebook and Twitter signin option.

With Tulalip you can Find what you need and Share what you know easier than ever.

From the welcome message, it looks like Tulalip is going to be a social search service. The Twitter sign-in/authorization page confirms that it is an â€œexperimental appâ€ from Microsoft Research.

The welcome page is already taken down by Microsoft. Right now, if you visit socl.com, you will get the following message.

Thanks for stopping by.

Socl.com is an internal design project from a team in Microsoft Research which was mistakenly published to the web.

We didnâ€™t mean to, honest.

We will keep you updated with any news that comes about Tulalip. Stay tuned, but it may take longer than we expect to become live on the web (if its not a failed experiment).